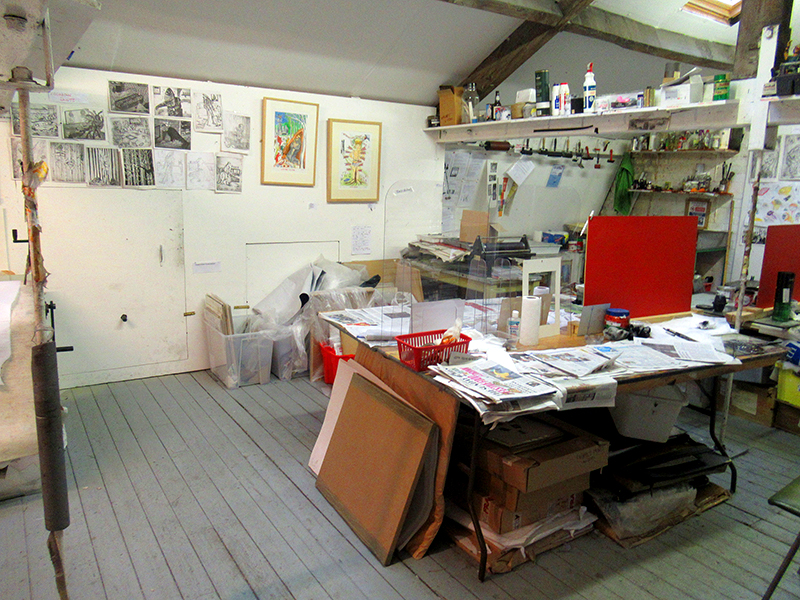 Excerpts from the project idea:

The theme will be ‘Rediscovering Bocholt’ – after the changes of Lockdown, after Brexit, after the city as refuge for many different peoples and cultures. At this time of European division and nationalism, this project will reinforce the very important international friendship and European links between the 2 twin towns, a piece of Rossendale transplanted and recreated in Bocholt.

The recreated Artist’s Studio would form an art installation in the Kunsthaus, as well as a working space set up both for the artists to create new work during the 10 days, but also involve members of the public and schools in the individual creation of prints responding to the buildings of the city of Bocholt, their own personal Bocholt, with their ‘impressions’. Over the 10 days, the work produced by both artists and project participants would gradually fill a large wall of the with fresh and exciting images in print of the buildings and special places of the city produced by its citizens and the artists. It will reinforce the ideas of home and refuge, reappraising the familiar , and recreating the city of Bocholt through print on an ambitious scale. Techniques used will be etchings and collograph prints created using a portable etching press.”